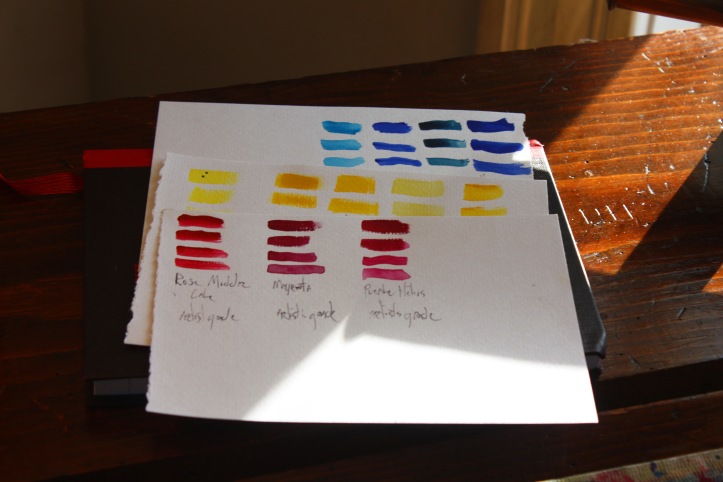 I have been experimenting in the studio recently, producing a plethora of bad art as I tinker with new ideas. I don’t feel badly about the bad art. Being bad at something is part of the path towards being good at something, I have learned. So I have been gleefully being bad as I draw and paint and fiddle. It’s not making me any money, to be sure, but there’s a lot of inventory in the studio already. In fact, my studio runneth over with paintings. (Hmmm, maybe it’s time to have a sale.).

Part of the problem for me, when I am experimenting with art, is that art, like writing, takes me to a different place. I THINK differently. If I think at all. Sometimes I think I just let go and something happens – a painting, a poem. It’s not very systematic and for years that was frustrating. How could I replicate what I just did? How could I take that theme, that style, that… whatever and build on it. Frankly, I kinda sucked at remembering what I did.

I have a memory like a steel sieve. I wish I could blame it on encroaching old age, but the truth is I have never had much of a memory, something that plagued me as far back as elementary school. In subjects where memorization was the key element to success, I failed miserably. In subjects where thinking and reasoning were the keys, I did well. I’ve tried lots of the tricks and tips for memorizing and for some reason, my brain doesn’t memorize well. Things go in and out of it pretty fast. Senile before my time I guess.

Artisticly, I really struggled with this for a long time. I was good, but I never progressed past a certain point. I ran on talent, and talent only gets you so far. At least it only got me so far. And I wanted to get better. (don’t we all.). I could creep to better just by doing more and more over years time. But I am in my heart, an impatient soul. I wasn’t going to live long enough to get as good as I wanted to be. I figured, that with the “just do it” method of improvement, I would have to be about 150 or so to get anywhere near where I wanted to be. My family has pretty good longevity genes, but that might be a little unrealistic.

Strangely, it was something from my work life that helped me on the artistic side.

You see, I had the same problem at work. A useless memory. But years ago, when I was in my thirties, I figured out how to get around it. I took notes. In fact, any of my clients will tell you (because I tell them.) that if it doesn’t get written down, it doesn’t happen. They know it. Folks at church know it. Heck, even my kids know it. Notes are a good, systematic way to get things done. A rolling “to do” list if you will. But then, as the age of the computer came into our lives, I was able to take notes differently. Using contact management software, I could take notes, but also build in notes about what worked and didn’t on each project. It’s all databased and after a while I could say “Oh, there’s the common factor in success.”

A fair number of people can do that in their heads. But I lived so in the moment that I needed help to do it. And besides, our minds trick us. We have pre-conceived ideas of what and why things work and our brains can convince us that we are a lot smarter than we think we are.

I can recall a time when I was part of a startup company designing and building TV studios. We built the very first PBS HDTV station, WTVI down in Charlotte, NC. When the project was done, I did the post mortem. I was sure what I was going to hear because we had a preconceived idea of what we had done well, and what we had done less well. After all, we knew what we were about. We believed our own press.

And we were so wrong. As the customer told us what he loved and what he didn’t love about what we did, we realized how wrong we were. We weren’t bad. No, we were good. But we weren’t good where we thought we were good. And again, from that day forward I kept those notes, systematized them, and helped me learn, there in companies I would work with later, where we did well, and what we needed to work on.

About four years ago, I finally figured out that if I wanted to get batter at my arts – writing, poetry, painting, etc, I had to do something like that. It wasn’t hard to do. I already had some of the tools. It just took discipline.

For instance, I could never forget which kind and exact tube of paint gave me exact hues that I loved (or hated). Now, when I buy a new color of paint, I create a paint card with the paint’s name, and painting a stroke of it in various intensities. After a painting is done, if I really like it, I make notes as to what I used. And finally, I can repeat myself with accuracy, when I want to.

I do the same thing with poetry. I write my poetry in a journaling program where I can tag things – both how I wrote it (meter, word selection, etc, as well as the feelings I was dealing with.) and later I can ask the journaling program to list all the poems or writings I have done on “X” to see what worked and what didn’t.

Sounds like a lot of work, but it isn’t really. It took me a while to figure out how to do it, but once I did, it was each. Five minutes before and after I write or paint, that’s all. It had to be easy or I likely would not do it. I am not the most disciplined person on the planet, so the discipline had to be easy.

The biggest investment is time. Time to think it through. How to do this. How to set it up. Me? I just want to write. I just want to paint. I don’t want to do no stinking software and databases. But the investment up front has proved to be worth it. I made the system easy. Simple. And I like simple. It lets me get more good stuff done.

Why am I writing this? I honestly don’t know. It was on my mind this morning. And I hated the poem I wrote today so there was no way I was going to post THAT. And too I was in my fifties before I figured it out. Maybe this will make someone younger think and help them move forward faster and sooner. Learning and applying this, my art/work has moved forward so much faster than it did those first 30 years of doing it.

Heck, at this rate, I might get where I want to be at 100, with in my family gene pool, that might just be doable!

PS – the journaling program I use is Life Journal 3. It’s way more powerful than they explain on the site. I’m kind of an evangelist for it.