Today after work, I hauled two loads of supplies and such in trusty Isuzu Trooper. It’s not that the studio is complete, but it’s close to functional and the other things that I need to do can be done in increments. I’m anxious to get painting again.

I put a sign up in front of the building. The secret’s out now – I paint.

I have the studio set up in sections, each with a function. 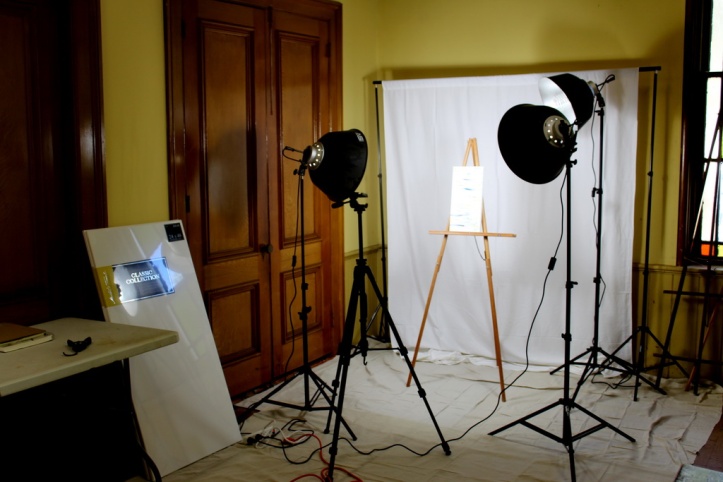 For instance, in one corner, I have a backdrop and lights to take pictures of my paintings. That’s been one of my frustrations for a long time. I didn’t have a place to get decent shots of the paintings, or at least consistent lighting. I was at the mercy of the weather and time of day. Now, I can shoot a piece when it’s done. I can also shoot other things as well, even portraits, if I am so inclined.

There’s a table for extra supplies. A lot of what I’ll use is on the work tables. But the extra will be here. What you can’t see is the area in front of the table. It isn’t very exciting to see, but it gives me a space to spray paint, to build large canvases, and tinker.

There’s the work table, where I will do most of my painting (except when I do large things). It’s big enough to hold 3-4 projects at once, which will be nice since I layer and I won’t have to be moving every painting to let it dry just because I want to work on another one.

You can see the big 12′ ladder in the back. That’s part of the “not done”. We’re still struggling to figure out what is going on with the lights. I have about 20 4700K LED tubes in the ceiling, way more than I need to get good light. But they never seem to run all at the same time. Each time I flick the light switch on and off, a different mix of lights come on. This is going to take a while to figure out.

The good news is that generally enough come on at any one time that I have good light where I need it.

I brought a couple of things from the house. The little plantation desk has been my drawing table for 15 years or more.  The Windsor chair is one of serveral I own. I love Windsor chairs. I think they are both beautiful and comfortable. Perfect for drawing.

The other chair is a chair that I bought for five bucks and it was hopelessly broken. But I’ve tinkered with it and tinkered with it, and even if it’s not perfect, it’s sturdy and oh so comfortable.

Between the two chairs (and maybe another I might bring over) I have a good place to just sit and talk with people who might drop by.

So that’s kind of it. I will likely do one more update after I get some of my paintings on the walls and such, but basically, I am ready to work. I’ll haul one more load over tomorrow, get the stuff put away, and maybe, just maybe, start painting tomorrow afternoon.