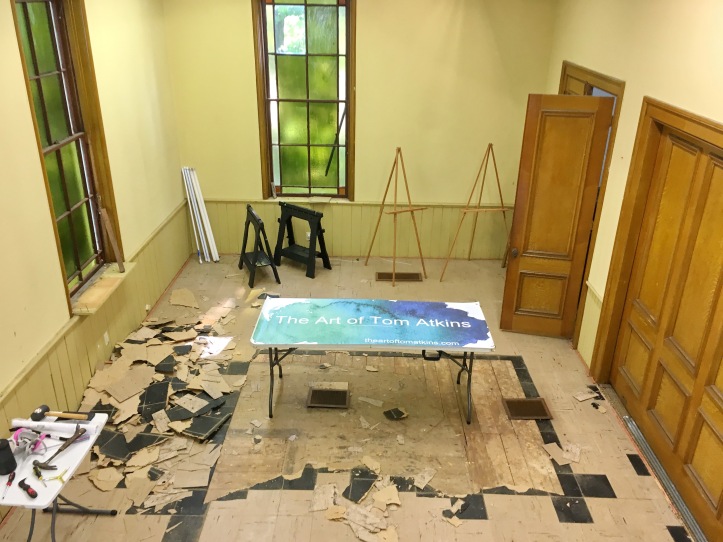 There’s this unwritten rule of projects that it has to get worse to get better. I think I am in the middle of the worse. But still, it’s progress.

I’ve kind of fallen into a rhythm on the whole rip up the subfloor thing. Slow, but a rhythm. I’ve found the rubber hammer against the crowbar thing works really well with French Cafe music, so I danced myself through the work this morning. With luck, I’ll have the section for my worktables cleared out tomorrow. I’ll start bagging the broken tiles, fiberboard and such, and hauling it down to the dumpster.

My landlord, Jeff, is the best. He went out and bought some replacement tubes for the fluorescent lights. They are LED lights but in the form factor of a fluorescent tube. AND, they put out a near-daylight color of 4700 Kelvin (A measurement of light color.). I installed them on the very tall ladder he bought to work in the sanctuary and the light is just terrific, even on a darkish day. Some of the lights fixtures don’t work but the new tubes make up for it.

The sign on the table is one I hope to put out front of the building on route 22.

Jeff has been busy too. He has bigger plans than I do, and way more work. There’s a section of kitchen floor in the basement that has collapsed and he has to fix it, and the cause of the collapse. Yesterday he began ripping up carpet in what was the sanctuary, and he got about a third of it done. I almost feel guilty because I’ll be working in a week or two, but he has so much ahead of him. Send up a prayer for his fortitude, and that that he doesn’t find too much weirdness as he pulls things apart.

Having lived in old houses much of my adult life, I know that’s a thing. Old buildings are full of surprises, and all of them cost time and money. But they are, to people like me, worth it. As I stood on the top of the 12′ ladder and took the picture today, I just smiled.

All I need is space and light, and this place has lots of both.